The Art of Dying


I have been trying to write a review of Nick Payne’s ‘The Art of Dying’ since I saw it at the Royal Court on 4th July 2014.

I have struggled for so long because this was a piece of theatre that appeals so directly to most individuals’ experience of the world.  It speaks candidly of life and death with the pedestrian gait of Nick Payne simply sitting on a chair and speaking with us, occasionally taking a sip of water and passing the glass from one side of his chair to the other.  The simplicity caught me off guard, and it was my turn to feel as if my heart had been speared into and my soul given flight.  And I didn’t see it coming – the text builds in such a way that you do not realise you are at the top of the mountain until you see that there is nowhere else to climb.  Only a gorgeous view, and a new perspective on what you have just experienced.

For a comprehensive, cohesive, succinct breakdown of the piece, I recommend Lyn Gardner’s review for the Guardian.  Because I just can’t/won’t do it, as three months of wrestling with my thoughts has demonstrated.  I do not wish to deconstruct the piece and discuss Nick Payne’s performance, his approach to structure, nor the sweet moment when an audience member sneezed and he paused to say “bless you”.  No, what I want to talk about is the starkly mortal feelings and images that have haunted me since seeing this piece.

To give some premise, Nick tells us three stories, separate from each other but intertwined in narrative.  One is about the death of his own father, another is about the scientist Richard Feynman dealing with the death of his wife, and another about a woman called Maggie with a degenerative disease who wishes to have control over her own death.  What the piece explores, in each case, is the evidently warped relationship we have with death, particularly for those surrounding or treating the dying.  When somebody is dying through illness, we use euphemisms such as ‘poorly’, which Nick smartly compares to describing a kitten with a cold.  We, and healthcare professionals, lie to each other about the extent of an illness, wishing not to upset anyone and to operate within as positive an outlook on a patient’s fate as possible.

Nick tells us that while his father was in hospital, it wasn’t until he actively interrogated the specialist that he discovered the real extent of the illness, and the relative redundancy of hope.   This leads us to question, which is more painful?  Ripping off a plaster in one quick motion, or eking the fibres across you skin gradually, excruciatingly, until at last it is relieved?

On BBC Two earlier this year, Louis Theroux did a documentary called Life and Death as part of a series called LA Stories.  This episode centred around West Hollywood’s Cedars-Sinai Medical Centre where vast sums of money are pumped into treatments for seemingly terminal conditions.  I remember the story of a man dying of cancer who was willing to keep undergoing treatment in the hope that he would survive, while the consultant knew full well that his chances were barely worth mentioning.  And yet they did mention them, instilled hope in the patient and his fiancée (whom he married, from his hospital bed) and the documentary followed his story to the eventual conclusion that his time was limited.  We watched as the truth dawned, and the light faded from his eyes.

We protect each other from the unspeakable.  But how useful is this censorship?  Nick offers that if we were to think about treating the illness rather than the patient, we might actually get somewhere with developing treatments.  And yet too often, too sadly, the best we can do is “morphine, and make him as comfortable as possible.”

“morphine, and make him as comfortable as possible.”

“...morphine, and make him as comfortable as possible.”

Being made comfortable: this is The Art of Dying.  It is my own nihilistic sentiment, but I suddenly struggled to see the need for blankets, pillows, flowers, morphine, treatments, nurses, doctors, bedpans, bed baths, et.al when all we are doing is biding time until the heartbeats stop.  Nick asks, “If we’re not helping them to die, what are we helping them to do?”  He tells us about his Granddad who was not afraid of death; he was afraid of being kept alive and living without his wife of 62 years.

This leads us to the controversial topic of euthanasia, and the story of Maggie.  Her sister assisted with her death and, provoking backlash, proceeded to deal with legal matters and medical research initiatives to do with the incident and her sister’s illness.  She spent time in phone calls, emails, meetings, sourcing information, filling her mind with things that were completely at odds with taking time to treasure the life of her sister.  Nick finishes the piece by telling us that sure, she could do all of this, she could fight a corner and contribute to science and society.  She could do the noble thing, and commit her life to history.

Or she could go out into the garden and pick conkers with her daughter, and miss her sister. 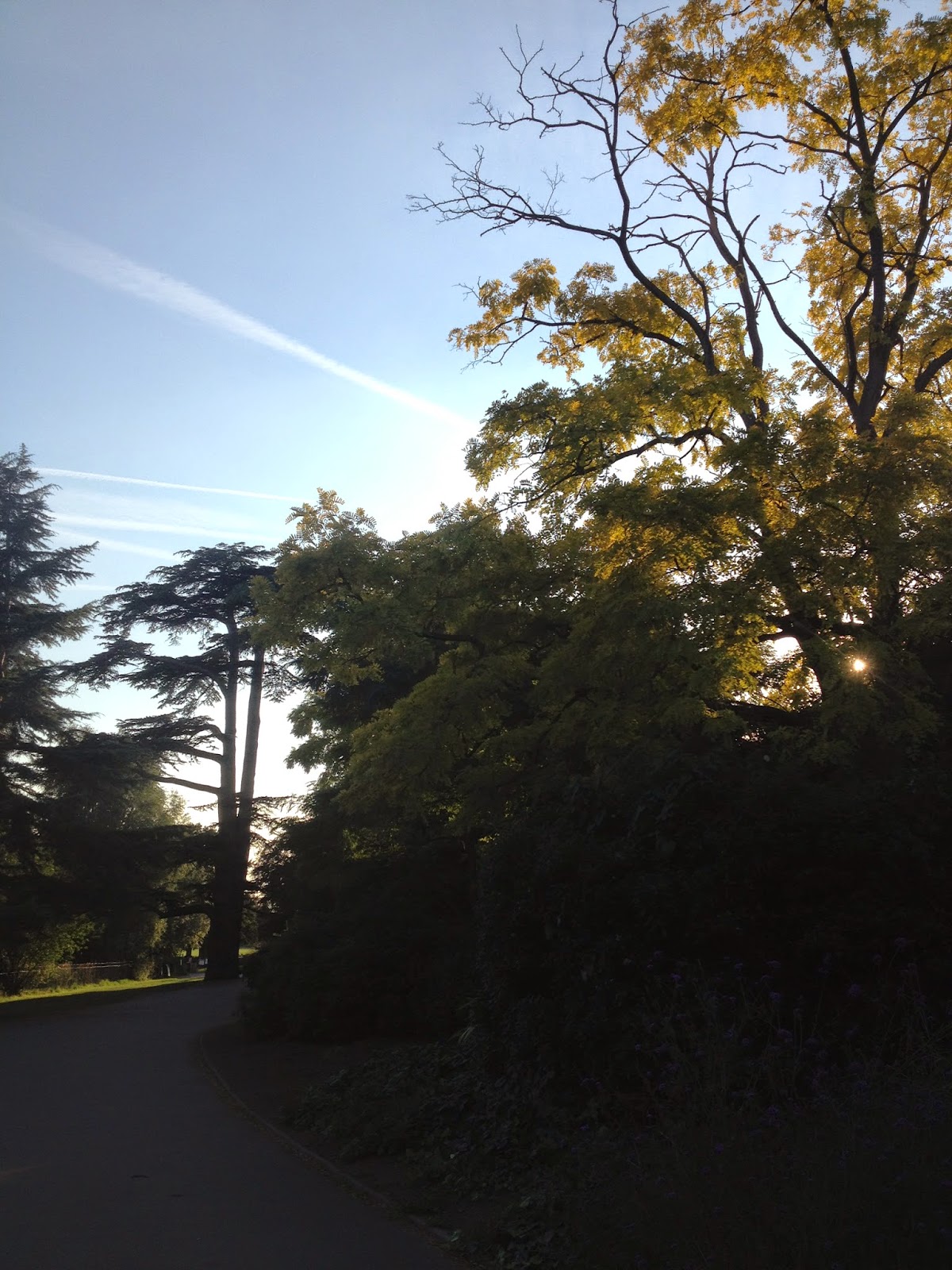 As autumn comes around, and the summer dies away, and the memories of school, college and university are but whispers ever receding towards silence, I always feel a little melancholy.  I love autumn, I love to watch the leaves turn to brown.  Most of all, I love that this is something I share with my mum – whenever I look at the trees and marvel at their ever-changing hue, I think of her.  Now, also, I think of the day her and my dad came to visit me at my new flat, and we took a walk through the gardens at Chiswick House.  For one glorious moment a gust of wind blew a host of leaves out of a tree and I watched as my parents walked beneath them.  I came to them and caught a leaf as it fell from a branch, and still have that leaf in my jacket pocket.

I also love the sunlight at this time of year.  It takes on a whole new, misty, golden hue, as if streaming through a haze of the memories of summer and the promise of cold winter nights.  On the bus to work yesterday, at around 4pm, I watched as a woman bent her face into the sunlight, closed her eyes, and basked in the warmth.  She smiled, and I have never seen someone so openly delight in their own connection to this burning star that keeps our planet alive, in the middle of this crazy, bustling city.  This was until she realised she was standing in a man’s way, and the moment was broken.

That’s the thing with autumn.  As beautiful as it is, it signals the ends of things.  Soon enough the trees will be bare, and the bright, shiny conker shells I used to pick up on my way home - only a matter of weeks ago – are already harder and harder to find.

The best we can do is to gradually add more layers of clothing, to watch as the evenings grow darker, to focus our energies on Hallowe’en, Thanksgiving, Bonfire night, Christmas and to make ourselves “as comfortable as possible.”

Because there is no cure for the coming seasons.  But there is our delight in each one of them – snow, daffodils, barbecues and conkers – and watching my parents walk beneath a sheet of falling leaves.

But - thankfully - the trees will blossom anew, and just as surely, again their leaves will fall.  Indeed, just as surely as our own mortality hurtles alongside us.  And this is why The Art of Dying struck me so sorely.  It wasn’t saying anything that any one of us hasn’t thought about since day one on the planet.  What is life itself, if not a daily bid to be as comfortable as possible towards the inevitable end?

I will calm down eventually, and softly forget all of this.  But I stood in front of the mirror yesterday and a song came on the radio that I had listened to solidly throughout May, June and July.  I remembered who I was then, and I remembered imagining my life now.  I looked out of the window and saw how surely things happen in such a short space of time.  I saw my responsibility to my own life – fragile, delicate, dying.

Since the Art of Dying, the image of a mother picking conkers with her daughter and craning her face towards the autumn sunlight while she longs for her sister has been plastered to the front of my brain.  And if I ever forget it, I will have forgotten what is truly important in my life.

Another catalyst to my thoughts was this essay by Lena Dunham, an edited extract from her forthcoming book ‘Not That Kind of Girl’.

“Finally, one day, I couldn't stand it any more: I walked into the kitchen, laid my head on the table, and asked my father, "How are we supposed to live every day if we know we're going to die?" He looked at me, clearly pained by the dawning of my genetically predestined morbidity. He had been the same way as a kid. A day never went by when he didn't think about his eventual demise. He sighed, leaned back in his chair, unable to conjure a comforting answer. "You just do."